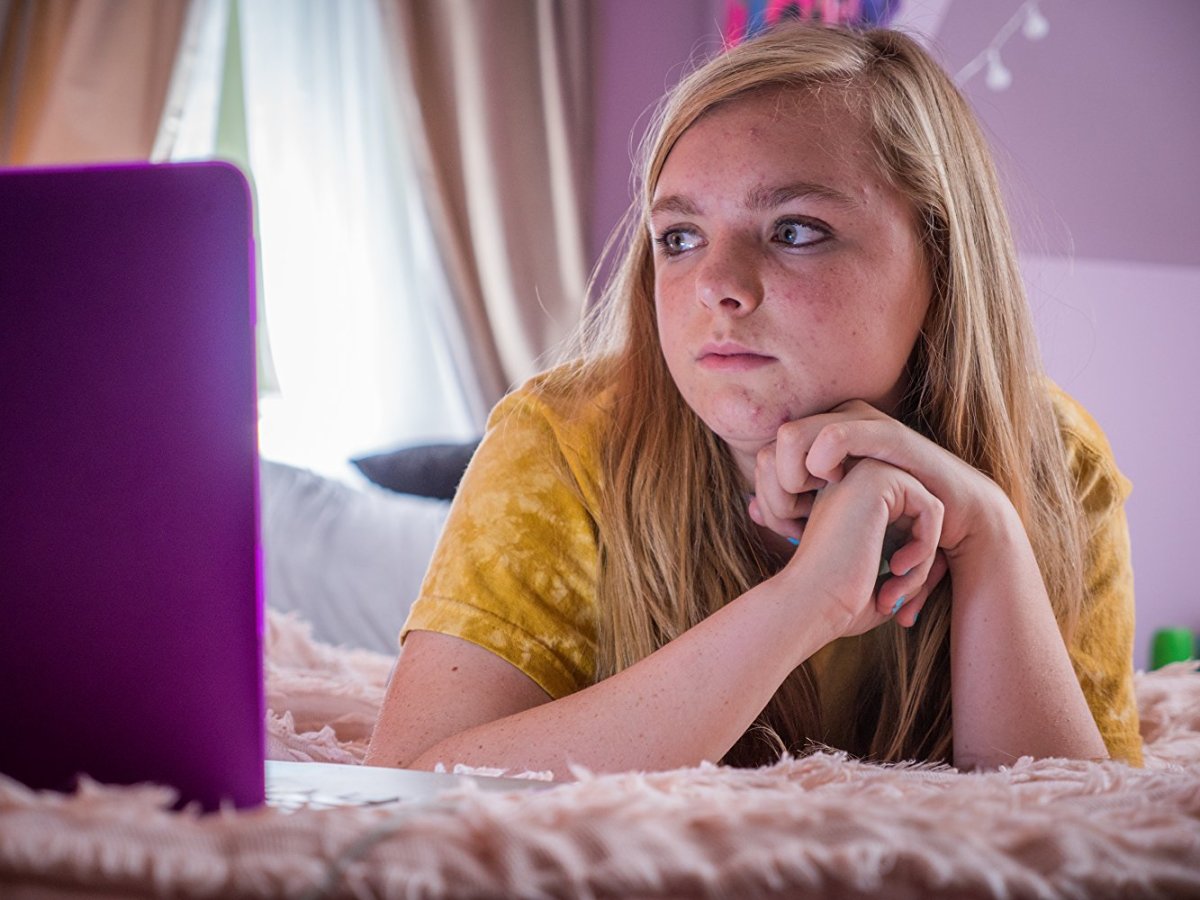 Elsie Fisher plays Kayla in Eighth Grade, the feature directorial debut from Bo Burnham, who also wrote the screenplay. Kayla is a pretty average young woman going into the final week of her eighth-grade year, filled with the same sorts of tensions, worries and fears that many of us had when we were on the cusp of such a fundamental change.

Kayla just wants to get through this last week intact, both emotionally and physically, but the push and pull between the known and unknown keeps things on edge. She loves her dad (Josh Hamilton) who loves her, but no one wants their dad to be hanging around all the time at that age. She’s awkward around boys and most everyone else. In other words, like all kids at that stage, she doesn’t know who she’s going to be yet.

Kayla is looking directly at the camera on the poster, something obscuring about half her face. The image conveys that this is a stark look at a teenage girl, which is the main point. The movie’s Sundance appearance is touted at the top while a big quote from Indiewire’s Kate Erbland praises the movie at the bottom.

Kayla is making her own YouTube video in the first trailer, talking about being yourself and not changing things about yourself just to be liked. That’s true for her as most people at school think she’s quiet when she’s really not. Her clueless dad is just one thing that’s making the last week of eighth grade weird, a list that also includes teachers trying to be hip and most everything else in the world. There are boys and friends and strange social dynamics that everyone is trying to figure out and which feel like the end of the world at the time but which really aren’t.

Fisher looks great and this looks like the rare movie (at least lately) about teens that is just about teens and their outsized lives, not adding on revenge plots or other strange stories to try and underline some point or another. If it’s as simple and heartfelt as what’s shown here this could be a really great movie that picks up word of mouth.

For the most part there’s just the trailer on A24’s official website for the movie along with links to its Twitter, Facebook and Instagram profiles. One nice contextual feature is the scroll of pull-quotes from critics are presented as a stream of text-like updates on the right of the page. On the studio’s information page you can also find the poster and a synopsis.

A24 sponsored a presence for the movie at VidCon, the popular gather of video creators and media companies who want to get their attention. There’s also been some advertising done via paid social media ads, but that’s all I’ve been exposed to or can find.

The movie was among those debuting at the Sundance Film Festival, where it received pretty decent praise and buzz and where Burnham talked about why he turned to filmmaking after burning out on the life of a standup comic. After that it was also screened at the SXSW Film Festival.

Burnham continued to be the focal point of much of the publicity, with interviews about how his career has evolved and why he decided to tell this story, particularly given his history with YouTube. There were also a few features on Fisher, including how she worked with Burnham to make the story more real, about how she felt it’s a good portrait of life at that age and more.

A24 has put together its usual very solid effort for a movie that has a lot of good word of mouth accompanying it as it finally opens for the public. The trailer and poster both present Fisher as a bright young talent who looks like she captures all the conflicting emotions of her character. Her efforts on the publicity circuit, combined with Burnham’s help to make the movie look pretty attractive, assuming the audience can find it.

Regal Cinemas has been running this update as a promoted post on Twitter highlighting the movie and its emotional story.

This past Wednesday A24 hosted a series of free screenings around the country that, importantly, were voluntarily free of MPAA ratings enforcement. That’s been a subject of conversation around the movie as the R rating the movie was given for a a few bad words and some age-relevant discussions of sexual matters have put it out of reach of many actual eighth graders.

Another profile of breakout star Elsie Fisher here, where she talks about making the movie and how she got started in the business.

A24 has also released a bunch of clips like this to help show people what all the buzz is about.

Writer/director Bo Burnham continues to make the media rounds to talk up his movie, which is gearing up to be a word-of-mouth success. Also many people have pointed out this disconnect, which is that a few words and scenes that are going to be familiar to anyone in junior high have given the movie a rating designed to keep out anyone who’s actually in junior high.

There’s been a whole wave of stories about writer/director Bo Burnham and his mission to get the movie made and tell the story in a realistic and respectful way. You can see instances of this on Indiewire, Buzzfeed, Variety just to name a few.

One of the common topics in reviews and write-ups about the movie is how it’s the rare movie to present a somewhat accurate portrait of what online/mobile life is like. Writer/director Bo Burnham talks here about what most movies get wrong on that subject.

Another short feaurette has been released by A24 that has director Bo Burnham talking about the story and why he made the movie.

The studio set up a form through which junior highs could request one of 100 free screenings of a PG-13 cut of the movie that eliminates some of the more graphic material.