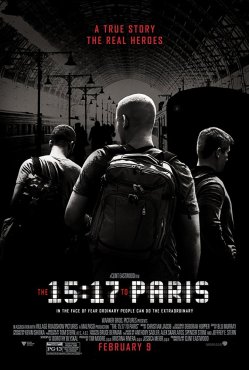 Director Clint Eastwood continues the “true life stories” phase of his career he began in 2009 with this week’s 15:17 to Paris. Like some of his other recent films this movie tells the story of ordinary people who rose to the occasion when something extraordinary was asked of them. In this case, it’s the 2015 attempted terrorist attack on a Paris-bound train that was scuttled by three American soldiers who happened to be on the train and who apprehended the attacker before he could do serious harm.

Notably, Eastwood cast the three actual individuals to play themselves. So Spencer Stone, Anthony Sadler and Alek Skarlatos all reenact the events of that day as well as the journeys that lead them to be on that train at that place at that time. Helping them along are seasoned pros like Jenna Fischer, Judy Greer and others who play the family, friends and other influences on the lives of the three soldiers. 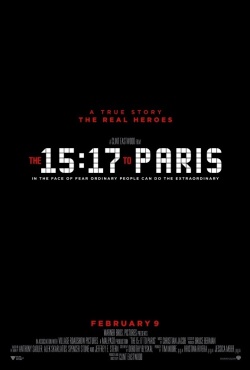 A teaser poster that didn’t offer much was the first item released. Against a black background we see the movie’s title offered like it’s appearing on a transit board, which is appropriate since that was the time of the train’s departure from Amsterdam. Copy lets everyone know exactly what to expect, first making sure we know it’s “A true story. The real heroes.” and then inspiring us by declaring “In the face of fear ordinary people can do the extraordinary.”

The theatrical poster recycles both those copy points as well as the title treatment, but this time places them against a photo of the three friends walking down a train platform, all moving away from the camera.

As the trailer opens all three of the guys are on the train and just hanging out, trying to relax in the middle of their trip and annoying each other as friends do. Suddenly people start running through the car in a panic, eventually followed by a man carrying an AK-47. Flashback to the past as we see the three of them as childhood friends, comrades in basic training and more, all set to not just inspiring music but the motivational words of a speech or sermon that tells you you can be something more. When it comes back to the present we see one of them, after nodding to his buddies, charge the gunman.

It’s evident from all the different elements on display that the entire movie will be hitting the idea of God putting these men where they were at the time pretty hard. The sermon in the background, the friendship between the three guys and comments about feeling as if life is pushing them toward something all tell us “destiny” or “fate” will be the predominant theme. If the movie follows the pattern of the trailer we’ll be moving in and out of various time periods to reinforce certain points or provide insights into what motivated these soldiers to act and not run.

There’s actually quite a bit happening on the movie’s official website, which opens with full-screen video in the background. On the front page are a number of prompts encouraging visitors to dive deeper into the story of the movie such as “Real Life Heroes” and “Director’s Vision.” All those take you to one of the short featurettes housed in the “Videos” section of the site, where you’ll also find the trailer.

The “Synopsis” is just that, offering a quick recap of the story, and “Gallery” has a handful of production stills. There are also links to the movie’s Facebook, Twitter and Instagram profiles at the end of the menu at the top.

While I couldn’t find linkable versions of them, there were 30-second spots created that were used online – particularly YouTube and Twitter – as well as TV, presumably. All continued hitting the same themes as the trailer about fate, duty and doing what’s right, even if it means putting yourself in harm’s way.

Unsurprisingly there was a huge push in the media around how it was the real guys involved in the day’s events playing themselves. That took the form of a feature interview with the group and a number of short featurettes with the three of them talking about their experiences.

In addition to that the three real-life heroes were sent on an extensive publicity tour, doing in-person appearances, sitting down for talk-show interviews and more. Eastwood did a bit of late-night and early-morning chatting as well.

As I said in the opening, this is very much in line with the last 10 years of Eastwood’s career, where he’s honed in on real-life inspirational stories – particularly those with a patriotic bent – as being an area to focus on. That theme has never been far from his work, including when he’s just been acting, but recently he seems to have decided that true stories are important to tell, even more so than the creation of fictional heroes.

Everything about the marketing wants you to understand that these three men are the kind of people who stand up every day to protect others. It’s not a story that’s referenced often, but it shows how it’s not high-profile leaders that stand between bad guys and the people they’re trying to hurt, but good people who refuse to stand idle. If you want to be a bit cynical you could call out how this kind of story fits in with the narrative espoused by one side of the ideological spectrum, but that doesn’t really matter. Eastwood wants to celebrate these heroes by telling their story.