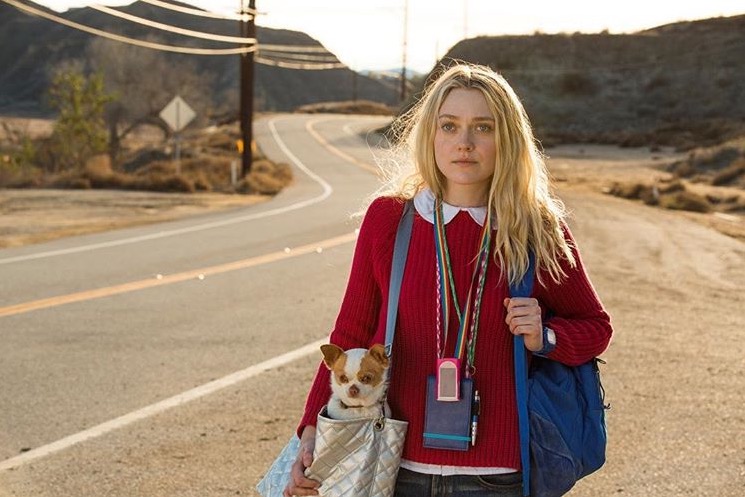 We’re in a cultural moment where it is OK to be unique and “unusual.” That makes the timing of the new film Please Stand By spot-on given its story, subject matter and characters. Dakota Fanning plays Wendy, an autistic young woman who loves Star Trek. So much so in fact she’s long been working on a Trek script of her own that she hopes to submit to a writing competition. But her circumstances, including the fact that she lives in a group home, make that difficult.

So, driven by one of the few things that gives her joy and comfort, she runs away and tries to make it to Los Angeles. As is often the cast with such movies there are misadventures and problems along the way, but she’s determined to get there. Meanwhile her therapist (Toni Collette) and sister (Alice Eve) are both trying to find her and make sure she’s safe.

An initial poster makes the Star Trek-centric storyline a small element, just a necklace around Wendy’s neck. Instead it’s about celebrating Wendy and her place in the world. “You can’t blend in when you were born to stand out” is copy that makes this seem like a journey of self-actualization, of finally embracing who you were meant to be. The colorful, twisted background she’s standing in front of (which looks like the inside of the massive space station at the end of Interstellar) reinforces the theme of uniqueness and identity.

The final poster simply features a giant version of Fanning’s face, partially obscured by her giving the Vulcan salute to someone just off-camera. Aside from the names and the title the only copy here further hints at the Star Trek connection, saying “Boldly Go.”

The one trailer starts out with Wendy narrating the Trek story she’s writing. A meeting with Scottie gives an insight into how structured her day is and needs to be in order for her to feel secure, a schedule that ends with watching “Star Trek” each day. The idea of entering the writing competition calls to her and she’s determined to go but not able because neither Scottie nor Audrey think it’s a good idea. So she takes matters – as well as her pet dog – into her own hands and gets on a bus herself. On the road she meets a couple fellow travelers who offer to help but who complicate matters, leading to Wendy being in the hospital, which she also runs away from. It ends with us hearing about how wonderful and creative Wendy is.

There’s a nice structure to the trailer and Fanning looks as if she gives a really good performance here as a woman for whom social niceties and other behaviors aren’t easy, to say the least. Her diagnosis is never stated outright but it’s clear she’s somewhere on the spectrum. More than anything the message here seems to be that it’s important to let everyone – regardless of their situation – love what they love without question (within reason) and encourage self-expression.

Magnolia didn’t create much of an official website for the movie, but given that it’s going day-and-date on VOD and in limited theaters that’s not hugely surprising. The site has a “Synopsis” and links to the various download platforms selling the film as well as a couple sections where you can grab images and photos to share on your own social profiles. There was also a Facebook page created where news and marketing assets were shared.

Nothing here I’m specifically aware of, but I can imagine Magnolia did so some targeted ad buys to drive downloads of the film.

In a nice touch, the studio gave TrekMovie.com, a leading site devoted to the franchise, an exclusive clip. That’s some great media relations there, Vern. Fanning was also able to work mentions of the film into the press duties she’s been doing for the TNT show “The Alienist” that she’s on.

Magnolia put together a nice little campaign here for a movie that very likely is going to fly under many people’s radars. It’s not huge, of course, and there’s nothing terribly innovative or original in it, but it presents an interesting story of a woman who wants to do what’s important to her and is unwilling – or unable – to accept “no” for an answer.

My hope is that the story as a whole presents Wendy’s character not like Sheldon from “Big Bang Theory,” someone who finds other people boring and unrelatable but as someone who is capable of so much in her own way. We’re beyond, as a culture, putting offensive labels on people who don’t fall into a traditional and outdated “normal” definition and that should be represented in media. So I’m crossing my fingers that Wendy’s issues are presented delicately and respectfully, not as a disability to be cured.

One thought on “Please Stand By – Marketing Recap”