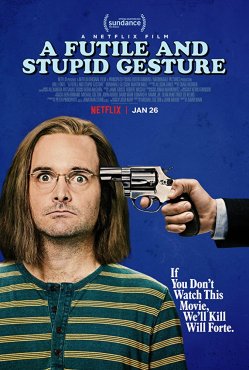 The one poster Netflix released took an obvious but no less funny route. It recreates perhaps the most iconic Lampoon cover of all time, but with an off-screen person pointing a gun at Forte’s head as opposed to that of a dog. The same promise/threat is made: “If you don’t watch this movie, we’ll kill Will Forte.” So points for nodding to the past and the story being told.

We see Mull as Kenney when the trailer starts as he introduces himself (though he’s older than Kenney, who died at the age of 33, ever was) and reacts poorly to some notes from an off-screen director. Flashback to 1970 as Kenney and Beard start things going but it’s clear their sense of humor isn’t shared by everyone as we see they’re soon the subject of protests and lawsuits by a variety of companies and organizations. Things progress as success mounts, though, as Kenney’s network of talent joins “Saturday Night Live,” makes irreverent movies based on stories from the magazine and more. There’s obviously personal turmoil as we see him fighting with other people, a result of his unusual approach toward life.

It’s pretty funny and is designed to immediately hook…well…people like me who grew up watching Animal House and Caddyshack and reading archived collections of the Lampoon magazine. While it seems structured more or less like a traditional biopic it does so with just the sort of self-awareness you’d expect based on both the subject matter and the talent involved. That’s on display most clearly in the scene where Mull not only acknowledges the actors aren’t exactly lookalikes for their real life subjects but that 1) He didn’t look like Forte when he was 27 (Kenney’s age at the time) and 2) Forte himself isn’t 27.

Nothing here, as is often the case with Netflix originals. The company also didn’t give it much attention on its brand profiles, opting to focus on its slate of TV shows.

Nope, but why bother?

The movie isn’t one Netflix acquired but one it produced from start to finish. Much of the publicity for it has, understandably, been around the various casting announcements. That makes sense considering Belushi, Gilda Radner, Belushi and countless others are all part of the story and are all being portrayed on-screen, though it was often acknowledged the actors looked little like the legends whose shoes they are stepping in. The star power getting people’s attention included director David Wain, a veteran of “The State,” Wet Hot American Summer and many other modern comedy classics.

It was scheduled to screen at this year’s Sundance Film Festival at roughly the same time it was showing up on Netflix.

This is one of those movies I’m just kind of genetically predisposed to look forward to. It’s got everything I enjoy: Revisiting and acknowledging some classic comedies and their creators, a fantastic comedic cast and crew, and a meta approach that pokes holes in the whole thing. The campaign had me from the moment the trailer opens when Martin Mull reacts…poorly…to a suggestion he embellish his introduction a bit.

We’ll have to see how that turns out in the actual film and it’s kind of weird (though not unprecedented) for the movie to be screening at Sundance at the same time it debuts on Netflix. But the campaign does a nice job of selling it to nerds like me who couldn’t get enough in our formative years of the people depicted in the story.

While he was also promoting his upcoming Netflix show, Joel McHale also talked with Colbert about how he first worked with Chevy Chase on “Community” and then played Chase in the movie.

One thought on “A Futile and Stupid Gesture – Marketing Recap”