Fox is not resting on its laurels or taking a more conventional approach to selling Deadpool 2. At least not based on the first few efforts that have been undertaken. 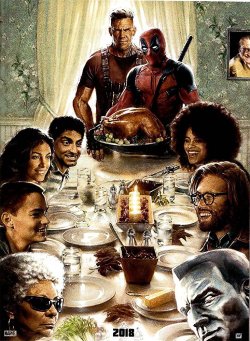 The introduction of the new character Domino was handled by calling back to the first image released for the first movie, showing her laying atop a prone Deadpool in front of a fireplace.

The first poster continued the meta approach while also playing with the idea that so many characters were being included, using a Norman Rockwell-esque painting to show all those characters sitting around a Thanksgiving dinner while a painting of Stan Lee hangs on the wall.

Deadpool was announced as the guest editor of a special issue of Good Housekeeping where he offered his usual brand of irreverent holiday recipes and decorating tips.

Now the first teaser is out but, of course there’s only about 15 seconds of footage from the movie in there. Instead it’s focused on Deadpool pulling a Bob Ross and showing people how to paint scenic landscapes.

It’s good to see that Fox isn’t messing with what worked so well the first time. There’s the risk that it will go too far and take things to an extreme, as well as the potential for them to pull back and play it safe so as not to damage the franchise.

That’s why it’s important to remember the franchise is *about* taking it too far. None of the jokes in that teaser trailer should really be allowed, but because Deadpool is unapologetically himself, it works and plays into the brand image.

These first marketing moves are great, but it’s also important to remember there was actually a traditional campaign that paralleled all the goofiness for the first movie. Traditional trailers came along with the ones where he addressed the audience directly and made fun of Hugh Jackman. So those will be coming for the second movie as well.

Until then, let’s just sit back and enjoy the goofiness.