Annapurna Pictures is hoping to capitalize on a hot cultural moment with this week’s release of Professor Marston and the Wonder Women. The movie follows William Moulton Marston (Luke Evans), a psychologist in the early 1940s, as he takes the ideas he’s researched and championed around women’s sexual strength and freedom, as well as his earlier invention of the lie detector, to create the superhero known as Wonder Woman.

Those ideas are not only expressed in comic form, albeit under a pseudonym, but put into practice. While he’s married to Elizabeth (Rebecca Hall) the relationship is an open one. He introduces a fascinating young student named Olive Byrne (Bella Heathcote) into the mix, the three of them forming a tight supportive unit that allows for the pushing of all sorts of boundaries.

Three character posters featured all three of the main cast against a bright background, the two women holding a very familiar looking lasso, with Olive also sporting a Wonder Woman-esque costume. “Ever wonder?” is the question posed on all three posters. There doesn’t appear to have been a final “theatrical” poster released, with the version showing Olive in costume used as the primary one-sheet. 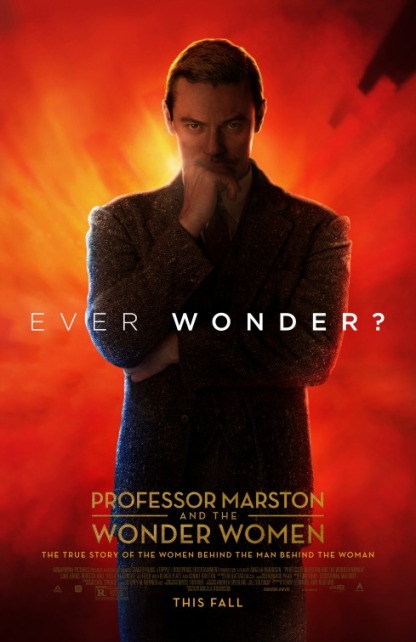 The first thing was a brief teaser that had voiceovers talking about secret identities and the reasons someone is writing something. All that as a woman steps out from the light and we see she’s dressed in a fancy getup that closely resembles some aspects of Wonder Woman’s costume.

Immediately as the trailer opens we meet Marston and find out he’s writing Wonder Woman under an assumed name, though a board of some sort is questioning his motivations for doing so. Marston becomes fascinated with a female student of his and they begin a relationship of some sort, one that eventually extends to include his wife. That review board takes issue with the content of the comics he’s writing and we find out he’s trying to understand the women in his life.

It’s not bad, showing the twisted and unexpected relationships that form between Marston, his wife and the student. And we certainly get that this is happening as he’s writing and setting out the early years of Wonder Woman. There’s talk of bondage and sadomasochism, all of which have been well-discussed topics integral to the character’s development.

A later trailer wasn’t all that much different, just with some new shading around the edges. The basic premise is that same, that Marston’s ideas for bringing his ideas about women’s empowerment aren’t making him any friends and are even viewed with skepticism by his wife. There are a few new scenes but the basic message is the same and it’s presented much more dramatically.

One final trailer offered much of the same footage but framed it like a cross between a comic book and Pop Up Video, with various secrets and facts about the characters and story being shared along the bottom of the screen. There was also a spot that took some of the footage and presented it in art form, coming off like a motion comic.

There’s not much happening on the movie’s official website. The official trailer appears in the middle of the front page, surrounded by the smoldering flames of comic books being burned, seemingly in protest. There are links along the side of the video player to buy tickets as well as to the movie’s Twitter, Instagram and Facebook profiles. Finally, if you click the flame icon, the video player disappears and you see that yes, indeed, someone is burning Wonder Woman comics.

Promoted posts were published on Twitter and Facebook that used short clips pulled from the trailers, selling the basic outline of the story and promising audiences “The year of Wonder Woman continues.” That’s a more overt attempt to ride the coattails of the earlier movie than had been made to date.

Online ads used the key art, particularly the shot of Heathcote wearing the very Wonder Woman-esque costume and holding a lasso, as well as shots of all three leads to drive ticket sales.

While the movie didn’t have a big push at San Diego Comic-Con, it was there that director Angela Robinson talked about how she discovered the story of the Marstons and what it was that attracted her to it. The movie was announced as one of those that would screen at the Toronto International Film Festival, a screening that resulted in pretty positive word-of-mouth and initial reviews.

Robinson spoke in an interview in EW’s fall movie preview about how this was really a love story the movie was sharing, albeit an unconventional one.

Writer/director Robinson talked about her own history as a Wonder Woman fan and the surprises that accompanied her research into the real lives of Marston and the women who helped define the character he created. She also addressed, while at Toronto, the advantageous timing of release, coming so soon after the very-successful Wonder Woman. That timing, she said, was purely coincidental because of the long time this project has been gestating and waiting to be approved.

All three main cast members did the press rounds, showing up on late night and early morning talk shows sometimes on their own and sometimes as a trio.

Hall and Evans were interviewed along with Robinson about the delicacy with which they had to film a particularly racy sex scene with Heathcote. A profile of Heathcote allowed her to offer her own thoughts on the “courageous” nature of the sex-positive story being shared in the movie. And Robinson kept talking about how surprising the untold story of Marston was and what motivated her to share it with the world.

As everyone, including myself, has pointed out, the studio here wants to make hay while the sun shines, hoping to capitalize off the tremendous popularity and goodwill of Wonder Woman earlier this year. Some aspects of the campaign do so explicitly while others are more implicit and subtle. Whatever the actual execution the audience is asked to apply a halo effect to this new release on account of the character’s resurgence into the spotlight of popular culture.

While that’s been the aim of the marketing campaign, the publicity efforts have been more focused on the constant reminders that Marston’s background and the events leading to the creation of Wonder Woman aren’t widely known. There’s also been a strong emphasis on the sex-positive nature of that backstory, with those condemning Marston’s relationships and worldviews clearly positioned as impediments to his progressive cause.

All that adds up to a campaign that’s trying to sell a relationship drama, though one with superhero trappings. It succeeds on that front, particularly when taken as a whole. If you’ve just been exposed to part of the effort your perspective may be different.

One thought on “Professor Marston and the Wonder Women – Marketing Recap”