Today is National Sunglasses Day and everyone on Twitter and Instagram is celebrating by sharing pictures of themselves – or their children – sporting shades. It may be happening on Facebook as well, but we’ll only know in two or three days when the News Feed surfaces those posts.

To mark the day let’s take a look at some iconic movie posters featuring not only the main characters from those films but shows them wearing sunglasses for whatever reason.

“It’s 106 miles to Chicago, we got a full tank of gas, half a pack of cigarettes, it’s dark… and we’re wearing sunglasses.”

The fact that Jake and Elwood Blues are perpetually wearing their sunglasses is part of the appeal of those characters, something that makes them look cooler than cool, to the extent that it becomes a joke in the final act of the story in that iconic line above. With that exception it’s never mentioned or pointed out by anyone, even when they’re still sporting them while wearing only a towel in a steam room. The only time you see either of them remove their sunglasses is when Jake is trying to stop Carrie Fisher’s character from mowing him down with a machine gun, and that removal is meant to signal just how sincere he’s being with his apology.

The movie that first brought Kate Hudson to most people’s attention did so initially by making her face more or less the sole element on the one sheet.

An important part of that photo is the hippie sunglasses she’s wearing, the purple tint of which means you can’t see her eyes. But what you can see are the reflected images of the rock concert she’s apparently watching, with at least a couple performers visible in the reflection along with the adoring throng.

That worked to not just sell the time period – the sunglasses themselves should have told you the story takes place in the post-Summer Of Love 70s – but also the setting in the world of the rock music industry.

This poster immediately conveyed the anonymous but lethal attitude of the five gangsters who are brought together by Joe to commit a bank robbery in Quentin Tarantino’s debut feature.

Chief among those attitude-conveying elements are the sunglasses worn by all five crooks, which pair nicely with the white shirts and black tie and suits they all wear. Those sunglasses mean they’re keeping part of themselves hidden while also trying to look as cool as possible, not just that they want to keep the sun out of their eyes. 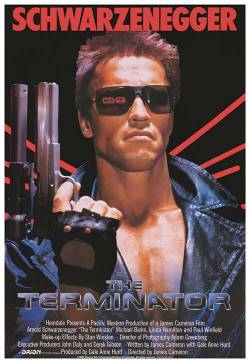 Again, the sunglasses are a key part of what we’ll learn about the character in James Cameron’s sci-fi action film.

On the poster Arnold Schwarzenegger wears them along with a leather jacket that’s unbuttoned down to, it seems, his knees. He’s meant to look as lethal as possible and the sunglasses convey a cool, detached, lethal professionalism that’s augmented by the fancy looking gun he’s carrying.

Importantly, those sunglasses also convey a bit of character information beyond his attitude, with what looks like a digital serial code seen on one of the lenses. That hints to the audience that this cold-blooded killer may not be entirely human. 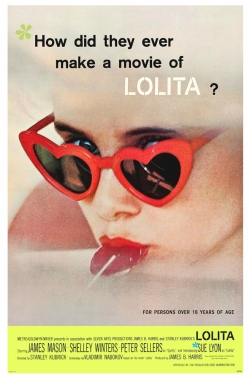 It’s not the 1997 remake, which was more concerned with selling star Jeremy Irons, but the 1967 original adaptation of Alexander Nabokov’s story of teen seduction that sports the notable shades.

The title character is seen on the poster suggestively eating a cherry-red lollipop, looking over the heart-shaped sunglasses she’s wearing at someone in the distance. There’s nothing in the reflection to see, so this is all about establishing the character, with those heart-shapes conveying that she’s all about love in some manner or another.